COVID-19 has hit us hard. Nonetheless, the fact remains that we have to move on with our lives and try to figure out ways possible to overcome this precarious situation. Yes, there have been financial implications that we might not have thought about a month ago, but having said that, there lies one sector which should be given a thought during these trying times. And that’s Real Estate. Here are some of the many reasons that will push you to consider a real estate investment.

When it comes to big cities, even when you are ready to shell out a large sum for a comfortable home, it is often hard to find your own private space. The lifestyle of big cities attracts several people from everywhere. This makes cities overcrowded, leaving a lot of congested buildings and very little personal space. But an alternative option for this can be investing in a plot. Plots are a great investment as they offer good ROI over a long period of time. Plus, owning a plot will give you the freedom to build your home the way you want.

Finding a piece of land in busy developed cities can be a very expensive affair. But if you move towards cities which are rapidly emerging, you will find a lot of affordable and great options. Emerging smart cities like Raipur are becoming a preferred destination amongst modern Indian homebuyers.

With both industrial and environmental serenity combined in this city, Raipur attracts a lot of residents from neighbouring states and cities to buy plots in Raipur. Plus, the city’s located near the centre of the country, thus making it equally accessible from all parts of the country. Moreover, ports like Kolkata and Bhubaneswar are just close enough to catalyse the industrial pace of the city.

With modernisation and globalisation already in effect in Raipur, the city is slowly transforming itself into a great modern city with amazing facilities that are far better maintained than any other metro city of India.

The transport system of Raipur is very well maintained with efficient systems and networks to allow the residents to travel with ease and comfort yet, paying the normal cost. The transport services of Raipur have gotten increasingly better with outsourcing of the responsibilities to private companies, in order to provide better services to people.

The city is very well planned and the government hasn’t allowed the people to take up unnecessary space and cover extra lands without permission. The adverse effects of not having such a policy can be seen in Delhi, which is not planned correctly due to the poor working of DDA.

According to the Chief Minister, Chhattisgarh has emerged as one of the most suitable destinations for real estate development. In the next 5 years Raipur will become a well planned city that will offer an eco-friendly living with the best of amenities there is to offer. With major construction plans by the government to plan out better roadway connectivity within the city and the development of the airport, Raipur is going to emerge as one of the best cities to live in. The city has been the focal point of revolutionary developments and proactive policies that are taken up by the state government of Chhattisgarh.

Raipur, the capital city of Chhattisgarh, is one of the top-rated well-planned cities in India and is growing rapidly. The thoughtfully planned structure of the city helps you fully enjoy the modern lifestyle amidst nature and buying the plots in Raipur for sale gives you the best of this experience. The increasing demand for plots in Raipur has led many reputed investors and buyers here. While buying a plot in Raipur, make sure it is situated in a location that easily connects you to educational institutes, hospitals, shopping malls, railway stations, everything you need is just around the corner.

With an amazing vibe that the city radiates, combined with the industrial and economic benefits thrown into the mix together with the serene history and urbane methodology of the infrastructure; covered with its geographical location and popularity along with its scope of a far brighter future, everything just falls into place and gives rise to the argument – ‘Raipur: The real estate capital of India’.

By investing in a residential plot in Raipur, you won’t have to compromise on space as this city has a low population density. You can live comfortably surrounded by the latest and finest amenities, a vibrant community and ample fresh air with abundant greenery. Here, you can design your dream home and build a life without compromising on a single thing! In the coming years there will also be a hike in the prices for real estate plots in Raipur, so right now is the right time to invest in residential plots before it gets too late. 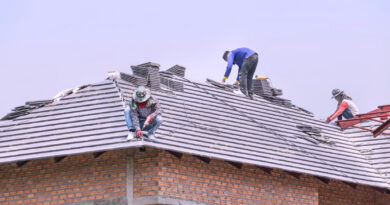 Decide the best Toronto Roofing Company for you

Why is Kharadi great for home buyers & investors?